Home » Delicate Constellation Tattoos Based on Your Zodiac Sign

You want a tattoo to symbolize your astrological sign, but don’t want it to be too obvious? Constellations representing zodiac signs provide a perfect way to get your star sign on your skin with a delicate design.

Astrology is one of the most ancient divination practices that’s still preserved to this day. More than 2,400 years ago, the Babylonians developed their own horoscopes based on the positioning of the stars.

Soon enough, the practice spread to the Mediterranean, became popular in Egypt, and was subsequently exported to the rest of the world. Western scientists used the stars to predict weather and interpret divine communications, which led to the advent of the zodiac system.

Astrological signs in Western astrology are named after constellations they were passing through in the time of naming. Beginning with Aries, we move on to Taurus, Gemini, Cancer, Leo, Virgo, Libra, Scorpio, Sagittarius, Capricorn, Aquarius and Pisces.

Although the practice has come under fire from skeptics, many purport that the stars describe their personality and future to a tee. Yet no matter how much you rely on the weekly horoscope section, astrological tattoos still provides a fantastic way to show off your own personal flair without being too literal.

Independent, spontaneous, uncomplicated, and outgoing: these are all words that describes an Aries type. Born between March 21st and April 19th, those born under the auspicious Aries constellation are relentlessly determined without getting caught up in fussy details.

With a delicate arched shape, Aries are lucky to have one of the most sleek looking constellations in the night sky. We love the look of the V-shape symbol, representing ram horns, placed within the constellation. The curved ram horns also look great as a stand alone visual element superimposed on the stars.

Represented by a bull, the Taurus is an earth sign that represents those born between April 20th and May 20th. Ruled by Venus, Taurus are known for enjoying material pleasure, beauty, art, and luxury; however, they’re also incredibly practical and stoic in the face of adversity.

Represented by a bull, the Taurus zodiac sign provides great tattoo inspiration. For a more fine-lined look, we suggest the pronged constellation – it’s understated enough to look sophisticated on the wrist or hand. Alternatively, the long and thin stars can work well on the side of the torso.

Never trust a Gemini, they say. Though Geminis get a lot of heat, those born under the constellation are ruled by one of the most sharp-witted, communicative, and versatile of the signs. Born between May 22nd and June 22nd, Geminis are air elements at heart and represented by a pair of twins to demonstrate their dual nature.

Geminis have a great opportunity to work with their constellation since it looks precisely like two figures holding hands. The image of the Gemini stars hanging above a fragile flower allows for a striking way to show off your fun-loving personality. Alternatively, an even more fine forearm tattoo separated by a line emphasizes the symmetrical nature of the Gemini.

Born between June 21 and July 22nd, Cancers are very receptive personalities most well known for their ability to unconditionally love friends and family. Though they may be somewhat indirect and dependent at times, robust Cancers are able to make family wherever they go in life.

Containing five stars, the Cancer constellation suggests a perfect triangular shape that fits well on the forearm or other flatteringly feminine areas of the body. We think the pronged shape looks particularly good along the collarbone, but the flowery white tattoo with pink hearts for the stars takes the cake.

It’s no doubt that Leos are show offs, but they’re one of the show offs that we love the most. Born between July 23rd and August 22nd, Leos belong to the fire element and are recognized for their natural exuberance, loyalty, confidence, and energetic displays of love.

The Leo constellation is certainly distinctive, which can make it difficult to pick an appropriate spot on the body for a Leo tattoo. You’ll have to carefully consider the orientation and sizing of the boxy, lion-like figure. The tattoo replacing the stars with blooming foliage on the forearm shows off the Leo with boisterous and feminine flair. For an even more playful look, the tattoo with stars replaced by colorful gems makes a bold statement.

Virgo signs are just as solid, practical, and stoic as their earth-bound element suggests. Regarded as the second largest constellation in the sky, Virgo was first recorded by the Babylonians as one of the most favorable collection of stars. Those born between August 23rd and September 22nd are represented by a simple maiden, which shows their organized, principled lifestyle.

There’s no limit to the ways that Virgos can represent themselves, especially since they’re represented by the maiden. We love the silhouette of a faceless, young woman with fine-lined flowers for hair. The way she clasps her heart shows her grounded yet sensitive nature: this tattoo would look great on the upper back or ribs.

Just like the name suggests, Libras strive for harmony and balance in their relationships. Those born between September 23rd and October 22nd are known for their good taste, naturally diplomatic disposition, and concern for social justice in the community.

Libras are denoted by a symbol of balancing scales, as well as two parallel lines with a bulge in the middle. The constellation itself nearly resembles a house, giving plenty of space to replace the stars with small flowers or an abstracted scale.

Scorpio, derived from the Latin name Scorpius meaning scorpion, was first identified by the Greek astronomer Ptolemy in the second century. However, the constellation independently pre-dated the Greeks by centuries. As one of the most misunderstood zodiac signs out there, Scorpios’ intensity is often confused for blind passion when it often results from rational perception.

Hands down, the Scorpio constellation has one of the most interesting shapes out of all the zodiac signs. The lingering, curved shape looks fantastic longer parts of the body, likes the ribs and ankle. We particularly like the look of it on the side of the arm, especially with the use of dotted lines and filled-in stars.

Spanning the 240 to 270th degree of the Zodiac, Sagittarius is a powerful sign associated with idealism, religion, philosophy, and direct action. These Jupiter-ruled signs are also very forthright with blunt humor, which can sometimes get them in trouble with others.

Those born under Sagittarius have tons of visual elements to work with that represent their directed nature: arrows, the centaur, and a complexly weaved constellation. The ankle tattoo with the flower-laden bow and arrow, along with the stars penciled in white, make for a compelling image. For a forearm tattoo, we suggest using the long shape of the arrow striking through the Sagittarius constellation since it fits so naturally on that area of the body.

Ambitious and practical, the Capricorn sign applies to those born between December 22nd and January 19th. Although they are high achievers, true Capricorns never lose their sense of social responsibility towards family, friends, and community.

Capricorns are represented by the Sea-Goat, which has the upper body of a goat and the lower half of a fish. Their dented triangle constellation provides an excellent way to introduce flowery visual elements. Alternatively, the striking image of the goat skull on the forearm shows off Capricorns’ natural independence.

Known for their rebellious nature, those under Aquarius have a relentless need to undercut dogmatic social and political ideals. Born between January 20th and February 18th, Aquarians are guided by the oftentimes conflicting modes of spontaneity and scientific idealization.

The Aquarius stars are patterned in an interesting, zig-zagging way that makes it ideal for creative reinterpretation. It looks fantastic as a larger tattoo placed on the upper back with gentle, frayed stars and fine lines.

Thousands of years ago, the Babylonians saw the Pisces constellation as a pair of fish joined by a simple cord. The constellation is often associated with the roman myth of Venus and Cupid, who transformed into fish to escape the rage of Typhon.

At heart, Pisces is a water sign concerned with subtle truth, mystery, and secrets. Full of imagination and emotional sensitivity, Pisces often feel that they are never truly at home.

To show off their mysterious nature, we recommend that your Pisces tattoo show off the two swimming koi fish. The tattoo of the two koi fish, positioned right on top of the Pisces constellation, demonstrates the affected nature of the wearer. You can even fill in the fish with a visual element that you like: flowers, gems, or lightly traced fish scales work great. 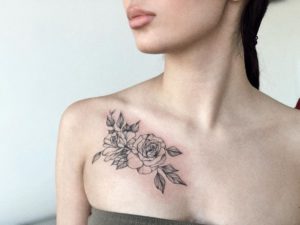 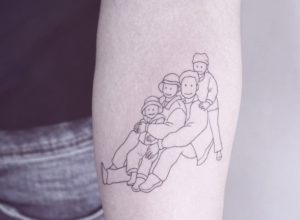 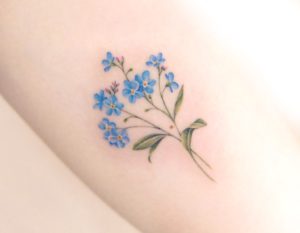 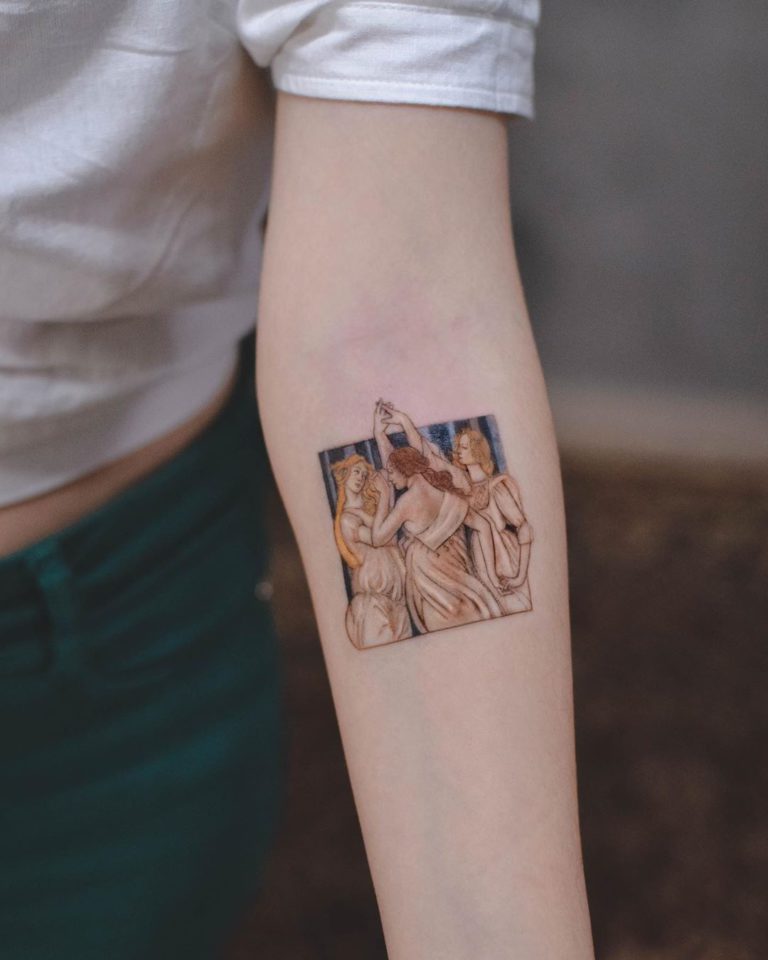 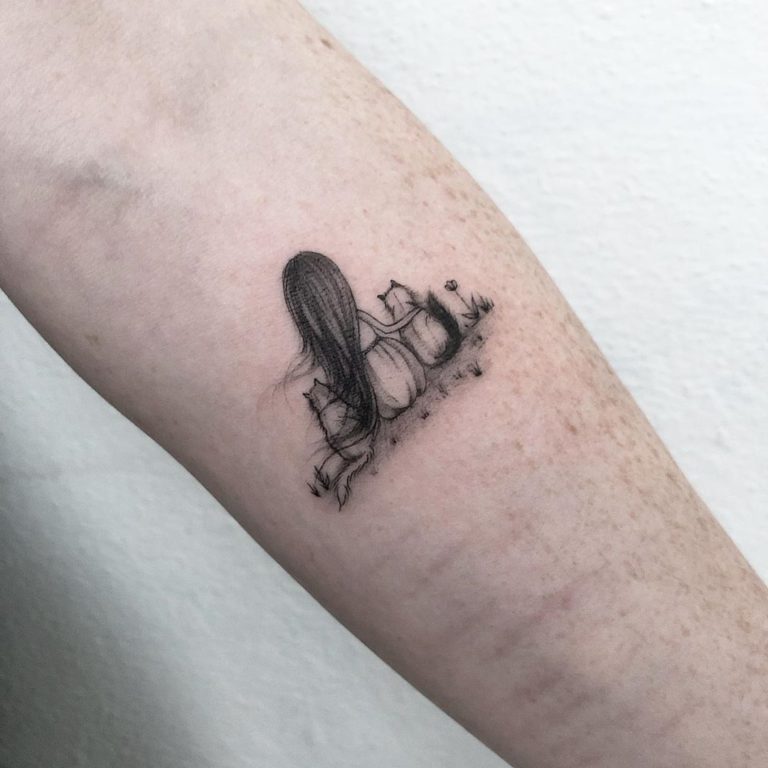 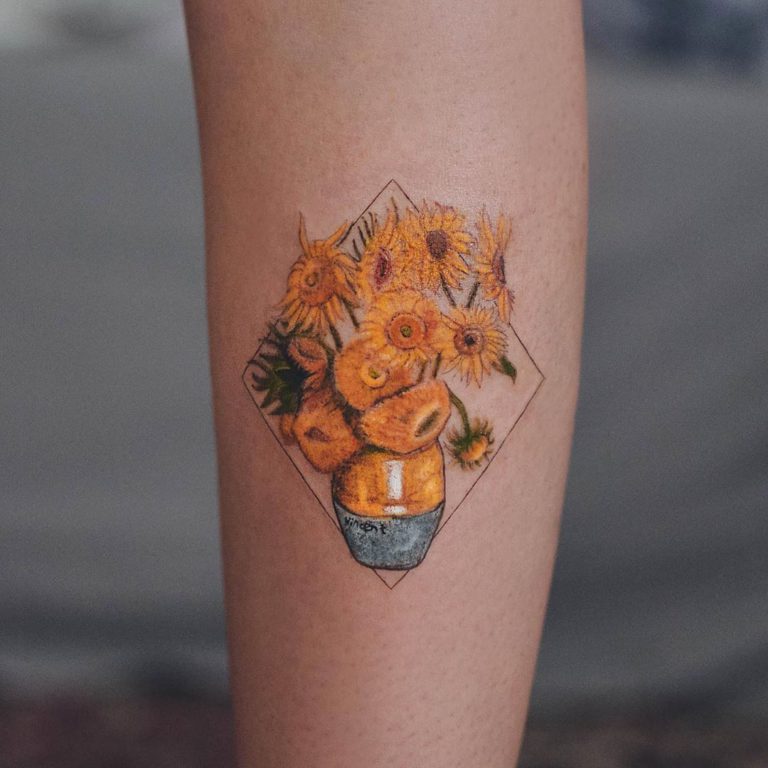 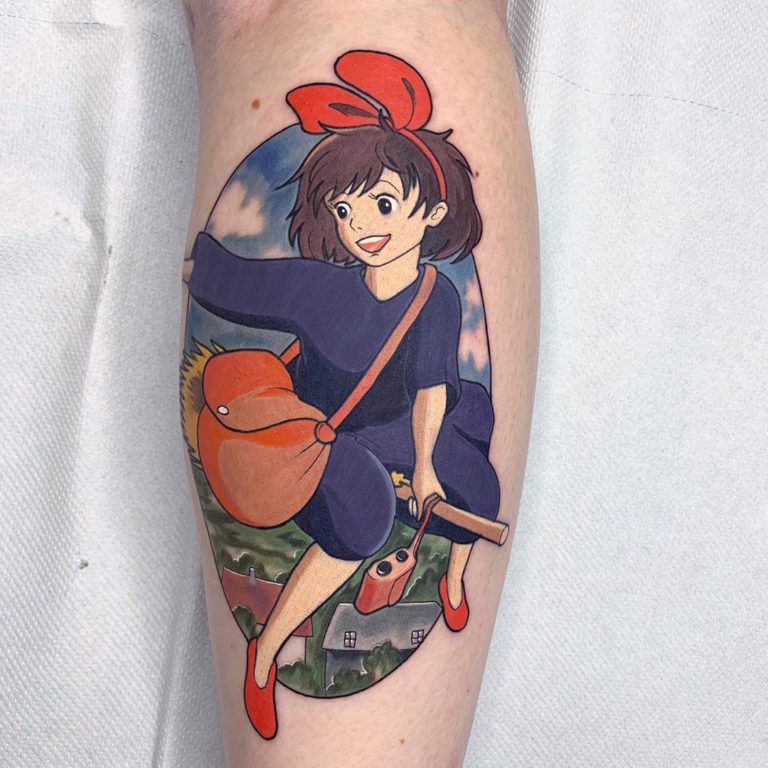 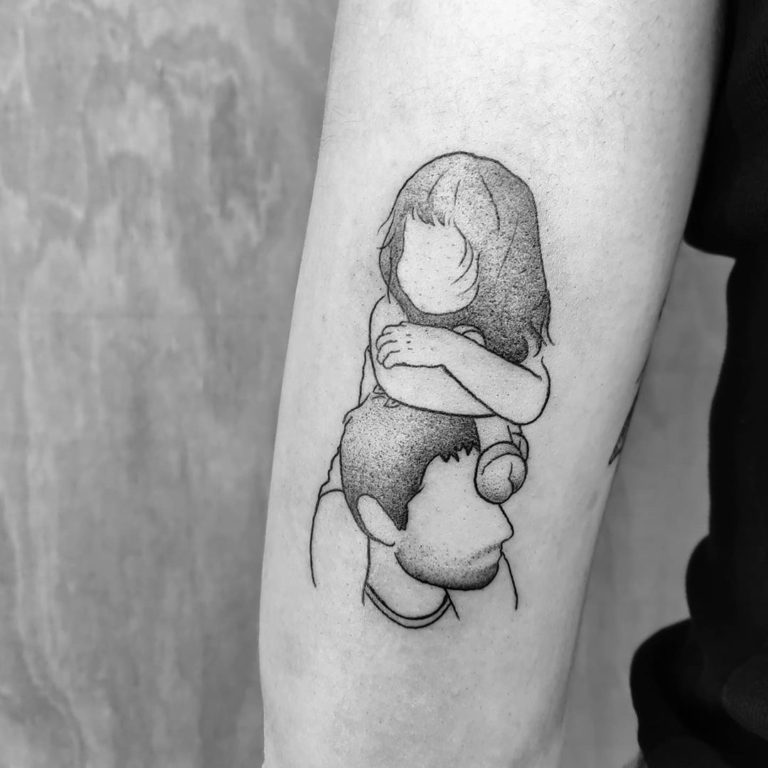 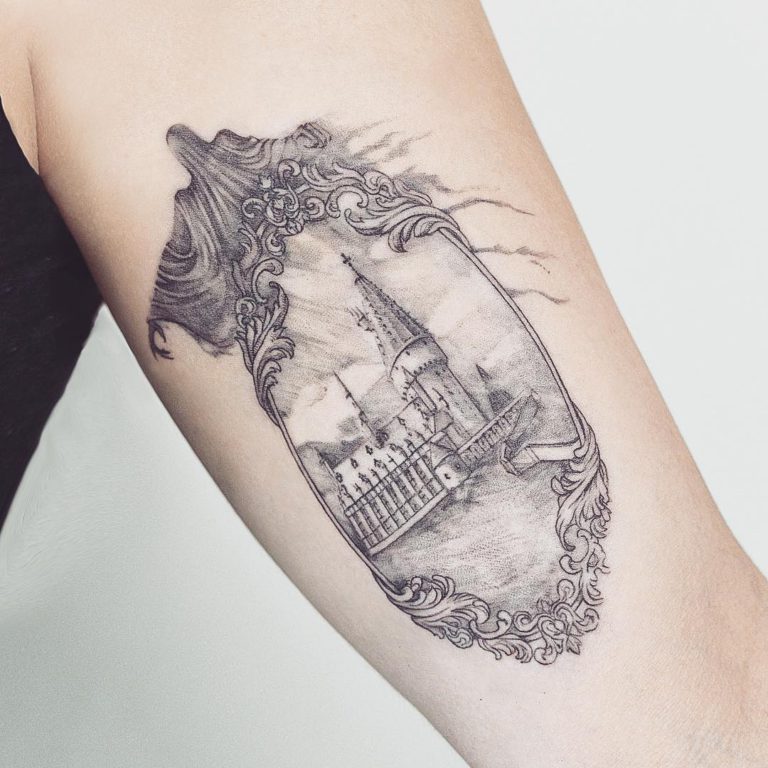 For those with reserves about committing to a large tattoo or for those who appreciate the littler things in life, tiny tattoos are the perfect solution. These little tattoos can make a large impact, but they can also be easily covered up by some foundation.